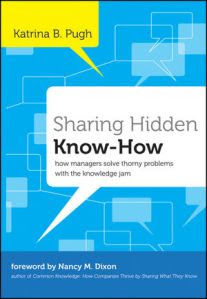 Pugh leaves as little to chance as a planned communication can contain within its unscripted boundaries. She zeros in on the transfer point in the knowledge transaction between knowledge originators and recipients. Pugh takes immediate aim at recipients who are too passive and one-sided exchanges where impervious originators are more interested in addressing their expertise -- not their colleagues:

"People who use the knowledge should drive the conversation, as they are more likely to draw out context that would make applying knowledge easier."

All too often a static presenter is appointed expert and does a brain dump. The recipients are then faced with two off-putting choices:

Either way, these situational roles impose their own limits: (1) being lectured at, or, (2) deviating from the presenter's preparations and the group being presented to. Pugh's methods for sparking meaningful exchanges center on the practical matter of liberating originators and recipients from the self-imposed limitations that impeded the transfer process. Here are a few ripe examples of such roadblocks and counter-steps or probes the facilitator can take to redirect the conversation:

1) Impatience: Participants are worn down by excessive detail.

Probe: Ask the group whether to continue the drill-down or table for further offline deliberation, a.k.a. "the parking lot."

2) Silence: Participants hold back their knowledge through suppression and distraction.

Probe: Build on pre-established trust in drawing out tight-lipped originators -- "Sally, you recently had something like that. Can you explain how you handled it?"

3) Passive-Aggressive: Some key players may weigh-in by sitting out the transfer or what Pugh terms "the discover/capture event" which ensues after the planning stage.

Probe: Connect the goal orientation of reticent participants  to the event results; mainly the knowledge gained and shared to support these goals. In effect, "make it worth their while" by making them accountable for these outcomes.

4) Argumentative: Some actors fancy their participation as the devil's advocate or out-and-out contrarian, injecting skepticism or doubt into the mix or even into the knowledge jam itself. Pugh intimates that a hostile edge in a disbelieving stance stems from participants who perceive the limits of their own authority to affect change, or even the questioning of that authority by the group.

Probe: "Don't let the argument be between the facilitator and doubter," writes Pugh. "Instead, use the group to address the argument."

These four examples are but a sliver of a rich and deep roadmap for engaging participants, repairing breakdowns, and advancing difficult but ultimately productive knowledge transfers. By articulating the protocols for consensus-building Kate Pugh has assembled a beckoning refuge for harboring the tensions and frictions that need to be addressed in any open and honest team-building effort.

Throughout the book Ms. Pugh maintains her insistence about the need for openness -- (in quoting Williams College President Adam Falk) "... to extend and refine our thinking in the presence of others who bring their own experiences and motivations." That goal seems all the more achievable as the methods detailed in Hidden Know-how find their way into the toolkits of knowledge brokers and conversations across conference room tables in all walks of organizational learning.
Posted by Marc Solomon at 3:25 PM No comments:

Betting Against the Church of the House of Google 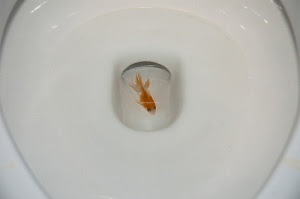 Marshall is suggesting that familiarity is the home of the oblivious. Our blinders are affixed to our unblinking screens. We put them on once and no interruption can slip between our trackable eyeballs and our data plans. Digital natives may awake ready to greet the dawn or completely hung over. Former Google CEO Eric Schmidt says that either way, they wake-up connected.

Being offline requires a manual override. It's not natural. And it requires reflexes, negotiations, and a tolerance for uncertainties that can't be novelized in gaming or commerce.

At last weekend's first annual Valley Summit, a forty-something social media marketer was addressing the virtues of Google Analytics to the conference gallery. He mentioned how his pet store merchandiser/client delivered him a handful of variations on the naming of some hot-selling accessory for dogs. But then he ran the keyword combos through Google AdWords and the verdict was unanimous: there is only one commonly accepted way that customers use to search for this item. That's right -- one way to the AdWords bidding auction or the highway of web marketing roadkill.

On one hand this was a battle of ideas between who keeps through my store and who lands on my site. On the other hand this is a major inversion-bender between the customer-leaning client and search-literate counsel. Man, talk about the client seeing the complexities of the world more clearly than their social media handlers!

The larger story here is that the new media brokers are all too willing to confuse the business model of a software giant for the marketplace itself. The fact that this single expression for doggie collars, leashes, or dinner bells is reducible to one expression says as much about the media buyers as it does about the search media. Each term in succession describes one thought planted in front of the next. That's the extemporaneous stamina of Google as mind-reader. There are no original search terms under the Google Sun.

It's one thing to "organize the world‘s information and make it universally accessible." It's quite another thing to appropriate the language for doing so as an auction-based sweepstakes where Google has trademarked all the concenants, vowels, and punctuation symbols. Every symbol on our keypads prompt a suggestion from Google. Our minds may be shooting blanks but our stares have been paved over by the power of Google suggestion.

I'm not suggesting this power is sinister any more than I'm suggesting that Google is acting as our scalable, benevolent, reference librarian in the cloud. Google is acting in its own corporate interest when it channels our curiosities into manageable chunks of its revenue model. The fact that the service is so compelling and the model is so persuasive means that Google's evisceration of the ad business sounds like the sour grapes of a dead fruit tree -- not the grounds for anti-trust litigation that awaited a browser-bundled PC empire when the Clinton Administration chased after Microsoft in the late nineties.

“The perfect search engine,” says co-founder and new CEO Larry Page, “would understand exactly what you mean and give back exactly what you want.” Page might be casting a perfectly earnest engineering posture. Or cynicism may compel him to see the non-paying Google public as a customer that doesn't know what it wants (other than for an intermediary to broker their virtual needs in a clean, unassuming interface). My money is on an enduring love of search science. That's as far as Larry's sincerity needs to travel for my purposes. I'll know that Larry shares my enthusiasm when he figures out a way to pad revenues from servicing the needs of researchers.

That's fantasy. One emerging reality is the appreciation of my new Pioneer Valley colleagues for brilliant search engineering. That's my takeaway from the first meetup of the Society for Useful Information last night in Northampton.  That appreciation will deepen as they reverse engineer Google into doing their bidding on Facebook, LinkedIn, Twitter, and other walled gardens to come. Perhaps then we'll start to warm to this reality: that we feel no pain with our fingers plugged into the sockets of Google Search.

Organic search, my ass.
Posted by Marc Solomon at 6:24 PM No comments:

Didn't I Know of You? I'm in the throes of reaching out to my adopted home of Western Massachusetts. It's a place that's welcomed me as a prodigal orphan who punched a one way ticket off Long Island, did my time in NYC, and never really warmed to Boston. The only sticking point is that I've never developed any business here in this "buy local" of all economies.

It's hard to imagine a more awkward introduction than drawing bands of would-be web developers and digital marketers into an FF vortex on Twitter to announce an open enrollment of my self-education program (Knowledge-ABLE) and the community for evolving it -- The Society for Useful Information (#SFUI). The SFUI introduction was held last month in Amherst and I'm continuing the same agenda at the Forbes Library this Monday.

Today I'm taking in the scene at the first ever Valley Summit where virtual personalities are materializing on our collective home turf. Eric Schmidt's parting observation before stepping down as Google CEO was that digital natives are never "online." Once they awake, their connected. I'm reminded of this as Karo Kilfeather is leading a social media marketing session on how the blurring together of the virtual and real world is a marriage that will stick. Honestly, my whole schtick (READ: thesis) is based on maintaining healthy boundaries between the two worlds. I've landed in the happy Valley -- the mayor of FourSquare be damned!

At least now I'm leveraging the less invasive and blander call to action of connecting on LinkedIn. It's no less impersonal than Twitter but at least my prospects can sniff me without feeling assaulted by non sequiturs. One of the folks I reached out to is a local WordPress developer named Terran Birrell. Terran was generous to share an insightful post on the finer points of the LinkedIn Soiree.

It doesn't make my pitch any less impersonal that the curriculum of Internet Research is inclusive to a fault. Outside of folks who would rather outsource their powers of reason it's hard to rule out an independently-minded individual who wouldn't benefit from a more disciplined approach to search engines, social bookmarking, RSS, and link analysis.

Here's my direct mail voice talking in the latest invites:

There are few allegiances I express with less reservation than a love for Pioneer Valley. Its natural beauty is keenly matched by the inner resourcefulness of those who call it home. We not only prefer to buy local. We insist on the ultimate demonstration of growing local – thinking for ourselves In that spirit I'm inviting you to join a community-minded group of local marketers, business owners, advocates, and educators who share this strong independent streak.

Honestly I have no idea what the turnout will be but I'm not holding my baited breath. This is a long term investment measured in community-building (sharing what I know). The fact I can hold a job and chew gum is what makes this enterprise feasible and me lucky to be sharing these skills. What I truly value is how web research augments the work of the advocates, educators, business owners, and marketers who I will grow to know in the coming years.