Lori McKenna and the Power of Suggestion Love

There are all kinds of therapies and fallacies and ointments that apply the marshaling of mental tugging and heart chugging. Our positive thinking powers and prayerful mantra-making are cast into the pantheon of attraction. On the face of it this is called "fortune." We seek on the hope that we will sow. But perhaps the larger goal (if not the more inflated fantasy) is that fortune will pursue us. Below the surface of fortune are its plumbings and fixtures -- the channelings of what we're out to attract...

- Not the seeds we sow
- Not the hands we're dealt

But the circumstances we aspire to claim us -- our hearts and minds conspiring to pry open this simple, binding assertion. There is no destiny without the pathway and us wayfarers are capable of no more and no less than fumbling for these doorways -- whether we turn out to be trailblazers, road kill, or that oddest of travelers: someone whose path travels according to plan.

These mileage markers don't arrive in my shins when I hit the pew kneelers. These soul deductions aren't meted out by cost-to-benefit calculations. Such revelations don't happen in the best prepared lectures or in the most densely packed lecture halls. But an epiphany or two have been known to slip out at least once or twice between performer and audience at venues of reverberating dimensions.

The most recent demonstration occurred last Sunday evening where Lori McKenna was holding court for six consecutive shows over the three-day holiday weekend at Club Passim in Cambridge.

On the surface Ms. McKenna is a mainstay member of the Boston folk scene. She's a troubadour with an attentive eye for emotional detail. Her band is a cabaret jangle that only she can march to. But her parades attract a diehard following that will gratefully hole-up in Passim to catch every show, regardless of the playlist or the backing players. Her Wikipedia blurb is incomplete without the fairly prominent footnote that McKenna is a major presence in a far larger pond. She's part of a tin pan alley braintrust stoking the starmaker (and sustainer) machinery vested in Nashville Tennessee. I say 'footnote'  not because this is an insubstantial source of achievement or revenue for a Boston folkie but simply because country western music never wet my wagon and has little to do with my appreciation for her greatness.

So then, what's the cosmic interplay between a local folk act and the meaning of universal wish fulfillment?

I could tell you that she engages her audience like a personal confidante. It's an authentic experience that you don't get with an insufferable celebrity. Of course, you could dismiss this as the expectation any fan-bonding rapport carries in the price of entry -- that two-way intimacy traveling both below and above the main stage.

I could tell you that her sincerity pumps through her songs with that rough-hewn diamond of a voice. You could toss this off as vocal training or the only choice available to the impassioned artist on a starvation diet of creative redemption: they do what they do because they do what they love. With a precious gift comes to incessant need to share it -- even when there's no transaction to complete, there's a loop to close. And this love is impervious to the pay-outs.

I could impress on you how Lori exudes the housewife life in the town she grew up in where her biggest lifestyle choice was buying a bigger home in the same town. OK, now we're getting somewhere.

It's not about the realty market in Stoughton, Mass. It's about the detour the RV takes when those power brokers make their pilgrimage from the Capital of Living Country to the do-hick backwater where Lori buys her groceries and scribbles down inspirations at delinquent traffic lights.

But how is it that the wife of a plumber and the mother of five gets to do the one thing in her life that entrances her for eight hours at a clip? It's not industry connections or pedigree lineage or even impeccable songwriting credentials (although she's helped move piles of Faith Hill and Amanda Moore through the inventories of the check-outs of Wal-Mart home electronics departments).

It's the uncompromising way she got there. She sang in her voice about the firsthand experience of her life. Faith Hill and Tim McGraw tried on that voice and made sure they could fit into it just fine. By the time Lori had established her sound, fame itself needed to relocate and spend time away from its own fame roots -- just to be in collaboration with McKenna.

And that's where the channeling happens. For those of us with mounting boundaries, narrowing margins, and near misses we can't abide a build-it-and-they-will-come proposition. For Lori it's as if the guests have already arrived and she has a dozen or so shiny new songs she'll be hauling to the local mall in her minivan for their seasonal outfits.

It's not just about suiting up a proper tune and its cadences. Lori told us at the show that her 22, 20 and 17 year-olds were later joined by her "back-up babies" of 10 and 7 through the power of suggestion love. Her gal pals had started their families and presto -- the seven-year itch is scratched off the list.

But that's the shine the future takes towards the wish-granting authority of those who have no names for what they want and the talents to claim those desires.

Lori told us she was going to wake up the Monday before Christmas and slip on her favorite adornment for wrapping gifts: an oversized sweatshirt, perhaps with a hoodie? That's the kind of prophetic clarity us mere doubters can face with sober confidence, boldface sincerity, and lucid luck. The lucidity lies in knowing the ingredients that go into the making of one's own luck.

On that score Lori McKenna has written her own ticket and it's been punched to more than one destination of choice.
Posted by Marc Solomon at 12:05 PM No comments: 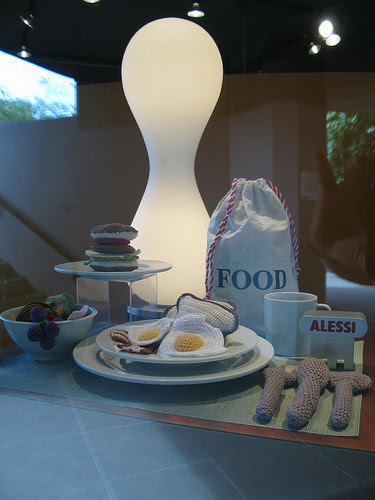 I recently caught up with a winter hibernation guide to imbibing in the stylized aura of shimmering Mad Men cocktails. It reminded me of the lingerings of respectable grown-ups drinking with impunity. They maintain their own obliviousness when the tumbler is shaken by the vaunted fictions of the camera. And what of their children? Are we still smarting from their own pungent tipsiness?

What characters sense and taste in memories and cinema is the ultimate stirring. It is an enterprise bursting to infect the communications pathways of entire marketing planets. Ladies and gents: from our gaping doors to your devouring eyes we bring you the Museum of Food.

That's the taste we smell through our sights -- the entrees and spirits captured in the evocative restaurants of film and the eat-in kitchens of classic sitcoms. The Food Network, the literal version of eye candy, has spawned a foodie offspring on most of its rivaling channels. The contents of those 2D sauce pans and table settings jettison chefs into a select crowd of scientific entertainers. Imagine when you swap out the kitchen help for the celebrated dining scenes, staffed by fully established franchises of fame. Who needs to reheat yesterday's leftovers when you're rolling out the specials on today's menu?

Knowing one's audience is to understand its taste for celebrity appetites. The campaign is zipless in its execution. No introductions are necessary. The script writes itself. The credit goes to that recipe -- the one insisted on by the audience. Which audience? Do you need to ask, dear? We're all on a first name basis here.

The familiar ingredients free us to portion control our connections to food events (formerly known as meals). They situate us in places (formerly known as physical locations). These seasonings could only be conjured up by our shared emotional histories with the actors we park under our cultural limelights.

So what does this have to do with more posts about museums and food?

A food museum would be the showcase for the re-enactment of celebrity meal scenes. From a tourism angle the concept is eminently franchisable. Each licensed property answers to the expectation of aromatic exhibitionism. The gift shop is the cafeteria. The advertising and the photo gallery are one in the same. Each chapter would festoon their cultural watersheds, local flavors, and neighborhoods of community food rituals. In effect, the first food chain set to endless variation. That's the pull of culinary sensuality in the food court of public opinion.

How could this play out theme-by-theme among the planet's food enthusiasts in the great dining halls of any Cosmo city of our vast global village?

Apart from the charitable donations I haven't landed a single loaded insinuation on the inflammatory minefields of food policy. Sure I'm letting obesity suit up as its own fashion statement. But do you hear me leafleting here for animal rights? How about the subsidizing of empty, cheap, diabetic-inducing calories? We're going to have to take that fight outside our 501c3 status, food museum goers!

We're going to have to stock those future flame wars in the freezer section and score brownie points on what we know. That would not be hunger but appetites -- especially the gurgling bellies of stars from stage, screen, tables and bar stools. Hey bub -- I can still see their mugs on the wall while I'm waiting for my own table to clear.
Posted by Marc Solomon at 7:51 PM No comments: