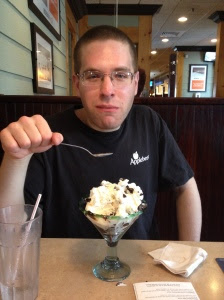 Last week marked the launch of my 21 year-old son’s entrance of adulthood. It didn’t all happen last week. It just seems that way this week.

This deeply symbolic passage comes in the form of a one fire escape walk-up efficiency that is nearly equidistant between his childhood home and the two part-time jobs that gave Jerry the confidence and capitalization to move into his own place.

It’s not just Jerry that’s feeling his way around this dramatic shift in roles and perceptions. Even his landlord who fills ten other units at the same address appeared stumped when asked where Jerry should park his commuter mountain bike. His folks were equally challenged to navigate the rules of engagement when it comes to the necessary hands-off, hands-on adjustments to this heady transition.

One potential path to success here is to follow the roadmap that brought Jerry to the doors of his newfound independence. That means being given an arduous series of tasks that don’t change much from day-to-day. While Jerry didn’t master his dual roles of food portioning and custodial work off the bat, he did come to master those jobs during his trial period. Both his supervisors probably get the sincerity and genuine appreciation that Jerry derives from this honest, repetitive work. I say probably because providing more certainty is not my role here.

When Jerry tells his boss that he loves his job, it’s not that he has any fanciful relationship to cleaning floors or waking up before dawn to have them done before the first customer arrives. It’s that he’s been given the chance to succeed on terms he understands and in tasks he’s come to master. It’s on the strength of his rote memorization that this mastery can free his mind to escape to the world of superheroes, YouTube videos, and Facebook pages where Jerry is free to hit his personal play and record buttons while mopping up messes and counting out chicken fingers.

But while Jerry’s memory can cycle through those repetitions, he’s unfamiliar with the hard and fast rules of online banking, advocating for himself in the workplace, or reflecting those needs in the form of a schedule; for instance, more predictable hours on the time clock to go with his weekly routines.

That’s not to say that Jerry can’t make up his mind or lacks the willpower and motivation to develop these skills. Jerry’s emancipation wasn’t based on any grand design, parental prodding, or peer models (although I was immensely proud of him for placing independent living at the top of his agenda nearly two years ago and sticking to it). That’s also not to say that the executive function required prioritizing, negotiating, and self-manage are challenges for most 21 year-olds -- regardless of how one’s brain works or their prospects pan out.

It’s my hope for Jerry that a year from now he’ll look back on all the hard knocks, confusing signals, hidden surprises and unscripted disruptions, and he’ll out-surprise all of us (as his priest foretold when Jerry received a scholarship from his parish). His responses will be more surprising than the unplanned learning that springs from all these tuition-free lessons. He’ll be better equipped to absorb them and turn these challenges into his own precisely because he didn’t read the correct book, go to the right school, kiss the right ass, or pass the right test with the highest score. Jerry’s ticket to success will not be punched in some gold-plated diploma mill. His past achievements and future horizons are uniquely his.

He’s grown up in a time where the role of parenting has expanded from providing a “roof over your head” to a dome clear over your future. Sometimes … okay … more than sometimes … it’s hard to know when to let go and when to rush in: call the meetings, neutralize the likeliest risks, or organize the new nest. But before I rush in to save the day, I need to ask: whose day am I saving? Am I sparing Jerry from the jaws of calamity or am I serving at the foot of expediency so that I can vanish as swiftly as I swooped in?

There are many executive level decisions I’ve spared Jerry in the past. Either he was going to encounter it later under some trained supervisor in some accredited program or some other as-yet unnamed responsible member of another social circle and scheduling orbit was going to fill Jerry’s shopping cart of independent living with the tools and the mental models needed to bring a sense of order and priority. Like all false hopes that day never arrived. What was there all along was Jerry’s resolve. His sense that if it was part of his experience, it was part of his own self-paced curriculum; that he could learn and even master the finer and rougher points of this unprotected world.

I’m going over to Jerry’s place tomorrow to help simplify the paperwork needed to apply for health insurance. Later in the afternoon his mom will be helping him with budgeting. I will not be organizing his books. I will not be washing the splatters of sauce that gather on his stove. But I will be thinking of the day I’m no longer required to sign Jerry up for vital services.

When that day comes there will be some other complication. I’m confident that when this new difficulty arises Jerry will rise up to meet it. He will learn the problem’s name and maybe even turned an initial drawback into a more neutral puzzle that he can solve – nor not? Perhaps he’ll dismiss it as so much background noise – not worthy of his attention or energy, like the 97% of the BS that will land in the mail deliveries to come. Those are the lesson plans on which a graying father supports an adult son to live his own rich life – not on the father’s terms, or on those of these future challenges, but on Jerry’s own.
Posted by Marc Solomon at 3:44 AM No comments: