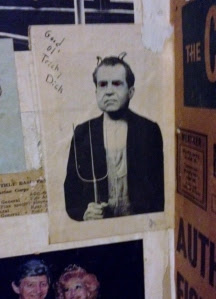 Was Richard Nixon a father figure?
That's the first questions everyone asks me
Stay turned for something even bigger
All the President's Men on All in the Family.

When I was growing up I had met the enemy and his name was President Nixon. I never actually met Nixon but I knew my parents voted for the other guy. He was enamored with power, tormented by insecurity, and kept his own enemies list, featuring some personal public heroes of mine who cared a lot more about consequences, than the powers which wield them.

Nixon also had a brilliant young communications strategist named Patrick Buchanan who saw the tie-dye and the free love and the picket signs and new that the young lefties were even less connected to their parents in their need for recognition than any single pronouncement, political stance, or pill you really needed to try. Buchanan saw the baby boomers need for attention as the single biggest reason to reject whatever injustice or misguided policy they were drawing attention to.

Hence, he hatched the silent majority -- those middle-Americans with the honest day's work, the shared sacrifice of national service, traditional values, and mortgages nearly paid off on homes well above the pay grades of their own parents. They would sooner bring comfort to the enemy than bring attention to themselves. Translation: Greatest Generation to Baby Boomers: shut-up, sit down, and get a haircut. Oh, and just because you never saw the dark times we endured doesn't diminish your own privileged lives.

The generational divide was not the only wedge issue played masterfully by the same re-election team. Perhaps too well when you consider the mix of hubris and paranoia that sealed the doom of said administration. No matter, the idea that a group of radical lefties could be dressed down by the cold stares of the so coined silent majority by Buchanan was real. That '72 landslide might have been a bad trip. But it was no hallucination.

Flash forward to today and middle America is softer around the middle only. Society is still going to hand basket Hades but now Pat Buchanan is hailing the moral rectitude of Vladimir Putin as a beacon for traditional values in the moral vacuums of today. What could be a clearer affirmation that our gridlocked politics bespeaks a right-leaning electorate than a sincere admiration for unapologetic authoritarians like Putin? And where are those proud and incensed majorities that go about their quiet lives? They're no longer in the majority and they're certainly not keeping faith with institutions or silence about their indignation.

And they make up in message volume what they're losing in members. And they're channeling their resentments into a bullhorn as well-funded as it is thunderous in the rejection that we still shoulder a common set of sacrifices for a country the self-made masses once aspired to call home.

Perhaps it's the impending loss of our majorities that makes the new face of Caucasian male America the stand your ground, pack and carry commando. We can't get our women to produce more babies. So Bubba who comes running to protect our porous borders when the invaders are the peasant children of Central American refugees, and not the imagined red menaces of yore.

And what about our own kids?  Our kids are both coddled and incarcerated. That's because we boomer parents broke the central tenet of all intergenerational understandings with the current crop of vegan-leaning, grade-inflated, prospect averse, loan indebted, and great recession-spooked millennials. We not only raised, clothed and fed them -- we made them our best friends. How's that for a conflict of interest when you're trying to balance the merits of eating meat with flipping burgers? How's that for getting them launched when we're just going to fix the first unscripted misfortune they encounter outside the nest? It's easier if we do it.

It's now the official policy of our government that corporations are people and money is speech. The wealthier you are, the chattier you can afford to be. Freedom is pursuit of the impulse by-lined in the late David Brinkley’s bio as "Everyone is Entitled to My Opinion." If speech is money does that make destitution a form of censorship? If corporations are people does that mean that corporate people get to vote twice?

What money ceases to be in the age of the noisy minority is time. Time is only money when you're working across the clock. Elites are untethered from the gravitational pressures of the billing cycle. They are getting in front of an issue just as we are falling behind on our payments. It's only when free speech is financed by the expenses we can't afford. Only then do we see the spike in attention known as a backlash.

Mostly though us non-elite majorities are too busy pedaling against our own hamster wheels to connect the prearranged dots of the message offensive. Free has a pleasing simplicity to libertarian frontierists as in free markets: me = "free" and you = "markets." Given the balancing of power (tilting heavily to the speechifiers) and the balancing of payments (leaning heavily taxpayer here) it's in the campaign underwriters' interests to blur and obfuscate the common rally points for the distracted and disenfranchised receivers of free speech.

Throwing red meat to the base is one intended outcome. Another is that the same agitations fogs the rhetoric for the less impassioned, blurs distinctions between candidates, and severs the connection between a negative (the advertising) and a positive (citizen participation in the electoral process). But there's another new and less understood connection between noisiness of the political classes and the ensuing silence of the apolitical majorities.

More and more messages are silent as well, resistant to the shrill, incendiary nature of institutional grandstanding and political confrontation. It's easy to tune out free speech. What's not so easy to muffle is one's online history -- where attentions veer to issues of credibility with much more scrutiny and sincerity than exposing which specific corporate interests are fronting smear campaigns in the name of free speech as an unimpeachable offense.

Like anyone with a phone between the ears I store my memory cramps in a Google loophole. What tropical storm am I referencing in the story about my friend's father's hip replacement? Was it Sandy? Irene? Was there an actual name for that ice storm in '96? No, that was the wedding party you held for your second marriage to wife #2. My story banks are saturated and even Google does not map to that level of storm damage.

Obscurity as the New Human Right

It's curious that we were raised on memory rights. Usually these were preserved to uphold the heroism of our forebears. Typically it was dedicated to the valor they displayed in defending abstract, universal concepts like freedom, justice, and the American way? Am I being cranky and defiant to suggest that American way lost its way during my generation's occupancy in the power seats of the social strata? No matter, a generation later the battle has shifted to more tangible and personal territory -- my past history as Google headline in perpetuity.

The NSA may know how many times I back scratch a mutual admirer with an Arab-sounding name during Ramadan. But that message board where I was flamed in the early 2000s should go up in fumigated smoke.

As we've crashed over the boundaries of middle-aged I'm wondering how many of us have fossilized the images of our former selves into the present. By that I mean our sense of what's right with the world lives resiliently in the past. I'm referring to behavior that any of us might have regarded in our former days as 'stodgy.'

Nostalgia is an intoxicant that preys on the brain's inclinations to move on -- for my circuits that means remembering the good, discarding the painful, and carrying enough scars to appreciate the healing power of time. The older one gets those nostalgia notions multiply, even take over the present with their promise of certainty and metastasize on our destinies with each ensuing loss of control.

Where does the bias of experience take us the further out we play our likely scenarios? The optimism we need for the future is stuck at that inflection point where we lost our power. Perhaps it's a bad guy whose rise to power usurped our own. Maybe it's more personal than that, coiled tightly in strong emotional memories of negative events? Katty Kay and Claire Shipman write in last month's Atlantic that women in particular: "We seem to be superbly equipped to scan the horizon for threats."

But hunkering down tilts the bias of experience towards resistance to new experience. And where does it take us? To settle where all I-know-better are leaning: to the defense of the self-serving argument. Talk about leaping to conclusions!

Circular logic is not only self-referential but it tends to impede our ability to cope outside that disappearing comfort zone -- the vestige of grumpy, embittered middle-age people. The same arms-folded folks that appeared so recalcitrant and intolerant to me as a youth when I heard tin soldiers and Nixon coming. And I clamored for a world where we were less silent – especially about how we all had something to discuss among our majority selves.

Posted by Marc Solomon at 8:12 AM No comments: