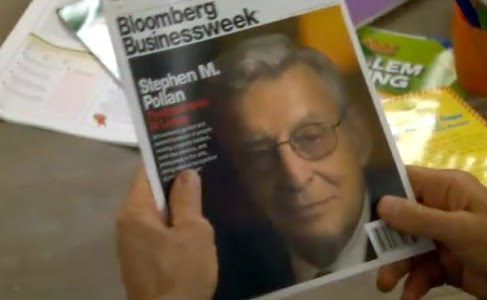 When I was young, spongy, unformed and self-absorbed I attended a young, idealistic, and small New England college. Hampshire convinced flocking Hamsters like me that you could mold that spongy absorption into your career clay, your alloy of choice.

My Hampshire diploma was my pink slip from the self-made sculpting factory. I received it 1984. "Morning in America" was my early wake-up nightmare to the reality that the days of self-made expressions visited on Kangaroo review committees had no currency outside of Camp Hamp.

I do remember the deflated bubbles, the kicks to the curb, and the queasy disorientation from the world of ideas to the world of shelter and clothing. But mostly I remember the woman with the megaphone blaring into my fallen house of young adulthood. The megaphoner-inner would be Grandma Harriet. Grandma would say:

Harriet saw my bachelor’s degree from the self-ordained and the bona fide flakiness that comes with encouraging (if not outright expecting) payment for self-expression. Her suggestion felt more like an order. It's not that I lacked direction, role models, or a running list of intriguing career outfits to try on. She said go see your uncle because whenever I expressed those ambitions or desires she was clueless what I was talking about. She said go see Uncle Stephen because that was the single most direct way out of my head and into a job that paid something.

Stephen I should point out was not just Uncle Stephen. He had the unjaundiced eye. He wished the best for his little kid sister's oldest son. He defined that wish by the roles of people he'd either portrayed or tried to persuade through his own unflinching candor:

It was that parade of characters who found their way into Stephen's mini publishing empire. For a 25 year stretch he and Mark Levine lined the Barnes and Noble self-help table with field guides, coaching manuals and life scripts. He wasn't just in my corner and kicking my ass. This was Uncle Stephen, one of America's leading personal finance mentors and a professional life strategist. His perceptions and influence fell into orbits that traveled far and wide of our extended family circle. Inside that circle, Stephen was the official voice of reason. He talked me through my unofficial failures to launch as a twenty-something. He talked me through my improvised workarounds. There were many of those.

Diplomas from Schools of Doubt

* I could tell you that a review copy of a runaway Stephen bestseller was my take home homework from those earlier coaching sessions. That would be misleading. He's always shown more interest in refining, channeling and ultimately investing his clients in their own destinies where self-discovery drives the narrative.

* I could tell you that I used the nesting impulse to impose my need for control and practicality onto my personal life.  I could tell you that I plunked my young adult savings down on a Park Slope co-op and road the coattails of the NYC real estate boom to financial stability. That would be someone else's investment success. Spoiler-alert: I held onto that apartment for a decade and still managed to lose 10% of the original sale price.

* I could tell you that I down-shifted from career drive to a more family-based focus. But my life's been one protracted stretch between where I work and where I live. That split has factored into great disruption, upheaval, and dissolution of several marriages.

So I won't lie. I will tell you straight as (Harriet is my witness) that Stephen is my secular rabbi and spiritual bookkeeper. In nearly all of Stephen's many interventions (barters, guiding questions, and petitions for my practicality) he's given me the gift of perspective-taking. He helped me unload the professional baggage we carry when the career options we select don't choose us back.

Our job, as he's often counseled, doesn't define us or who or what we mean to the people we cherish. It's a stream of income. It's just as fluid and prone to change as our income stream prospects.

I went back to visit Stephen recently. It wasn't that I needed career advice, negotiation pointers for some negotiation in the balance, or greater appreciation for letting go of forces beyond my control.

I needed to tell him about a wonderful new job that among other things caused people I barely know to contact me out of the blue for career pointers and job-hunting approaches. I told Stephen that the experiences are my firsthand bumps and mid-course corrections. The messaging, however, is a page straight from the Stephen playbook. That alignment between personal ambition and market reality is a lifetime balancing act written, produced, and scored by Stephen Pollan.

The day I got to his office, his current admin (in a bad run of temporary admins) had bailed on the later afternoon appointments. Fresh from an AM appointment the same day, my sister-in-law prepared me for the empty reception area and the likelihood that Stephen would be jumping through honking congestion to make it back for our 4 pm (-- he strode in at 4:01 without breaking a sweat and asking how late he was).

I noticed then that his bookcases were bare and the wall was lined with moving crates. He had his office bags packed. No more cross-town hurdle-jumping wind sprints. Just an elevator commute from his east-side residence to a first floor professional suite in the same building.

He told me that he was starting his newest book. The working title? The Tyranny of Self. He wasn't too attached to it as he offered to let me steal it. After enough of Stephen's counsel, I understand. This was the 13th in a 12 step program to address the same demons I confronted when I left Hampshire: The raging seduction of a workaholic, who hides behind the virtue of the provider, and in the concealment, loses the dignity of his labor.

They share their better selves with the work, not with the selected people that a less involved laborer would simply understand as their home, their shelter from the ungenerous world. After enough trips to Stephen, I understand the need to give away working titles.
Posted by Marc Solomon at 4:38 PM No comments: