These ah Your Dad's Sawks 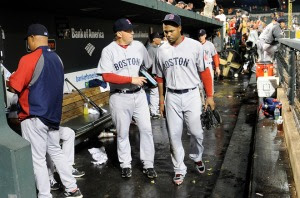 Spanked in Baltimore
"We're all Yankee fans?"
This ain't no All-Star Game
For me 2 also-rans

Unloading Francona to the Cards?
Since when did nice guys finish first?
Imploding Theo to the Cubs?
And a Sawks fan can't even curse
Posted by Marc Solomon at 9:34 AM No comments: 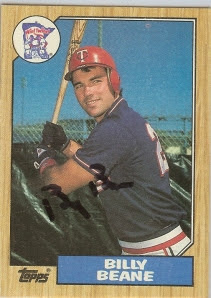 Billy Beane is a man who ate his own ego for lunch so he could feed a diaspora of major league misfits. In the newly released film Moneyball, the ultimate cressendo to this narrative sounds as farfetched as the chances for the release of Moneyball II. What could be a more tragic and poetic irony? His team loses in 2003 to the one assembled by Theo Epstein. Epstein descends from the same mountain of math parading the same Jamesian tablets of runs, hits, chapters, and verses. This tragedy is made all the more ironic by the scene that wasn't cut: Beane turns down the chance to play after 2002 with sabermetrician kingpin Bill James and a payroll in an upmarket sports-crazed fishbowl called Boston.

I practice sublimation on a professional level. That means trying not too waiver to far from the middle between expressive and controlled behavior: READ: Bob Dole referring to self as "Dole." It's important to objectify one's self through the eyes of others -- not as a bystander but an active observer, a.k.a. writer. Nothing personal = everything impersonal. That skill takes on added importance after two and a half divorces, two religions, twenty residences, five careers (no crap jos need apply) and the assurance there's no one else's flat-footed shoes I'd rather walk in. It makes complete sense that the one group I would have as a member consists of insurgent iconoclasts. No one joins groups that would have them as members. We are a band of brothers. They are family to me. One of them, Bal (a bona-fide Jamesian disciple), accompanied me to Moneyball over the weekend.

Bal believes that Beane's early fall from baseball grace led Beane to draw lessons on both a personal and communal level:

1. Laboring in obscurity can spell the difference between personal redemption and public humiliation (Beane fanned out in New York first)
2. Baseball scouts (a flock to which Billy once belonged) are speculators with no skin in the game that platforms their recommendations

We see that Beane's idea of accountability is not based on raw potential but actual performance. We see him put up his own limited savings to consummate a deal and turn down an unnegotiated offer from the Red Sox that could have floated one-third of his A's payroll. Not surprisingly, Beane has since parlayed his high stakes dealing into part-owner status in the A's -- talk about job security!

There's another non-clinical term for "sublimation" called team work. There's a scene where Beane confronts David Justice in a terra forma batting cage about the impending arc of his stardom. Justice is "more equal" than the other players because he consumes close to 20% of Beane's 2002 payroll but his earning potential is powering down. It's a classic lesson in free agency economics: "I don't need the money. I need the recognition that I'm worth the money."

Beane gives Justice a motivational sneak peak at the non-financial allure of retirement. That's the humility of raising one's leadership game just as a player starts to lose a step or two on the field. Mercifully there were no pep rallies or Gipper locker room speeches. The closest thing to a nosedive and comebacker narrative played out in the trivial media gossip about the blame and credit-taking. Beane was the fall guy and then Houdini when Art Howe was portrayed in the local press as the string-puller.

My favorite reconciliation in the movie is not between players, or lovers, or family members, or scouting reports but an abstraction. It's a notion that Beane's consuming obsessions dispense with deliberate clarity and speed: "I like to win. I hate to lose." The polarity, it seems, is not equal.

Everything is in perspective -- nothing personal.
Posted by Marc Solomon at 5:17 AM No comments: 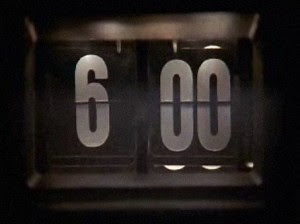 Airport layovers are nature’s way of telling you that the present is never as exhilarating as the promise made by the itinerary that created it. Layovers are the present tense in perpetuity -- a sleight of clock hand that drum rolls into the oblivion of Bill Murray’s wake-up call. Punxsutawney Phil didn’t see his shadow and all flights are hound-grounded.

I crawl into the moment by watching former President Clinton carbing ‘n marbling himself into a stent bypass on CNN. Nearby a bullet-shaped member of the supersize majority is recounting his day in the life of food to no one and his cell phone. A med student points up at the CNN cardio-mercial and chimes in: “His vessels didn’t take – that’s three weeks after surgery!”

I’m watching the bloat in my own beltline after five days of Sodexho-laden sauces and vegetables languishing in puddles of Crisco. The fact that my colleagues and I had time to scarf but not to use the gym reminds me that recess is not just a luxury for unsupervised and underachieving children.

Another wrinkle in the exhilaration vacuum is the notion that one can buy complete shaving kits from a vending machine by the CNN Cardiac show but there’s nowhere in Dallas Fort Worth International to purchase a U.S. postage stamp. Fortunately Marilyn, the information booth minder, takes it upon herself to supply them out of her own purse and refuses to transact unless I receive the exact change. Alas, pennies have as much of a future in airports as letters have in the future of commercial communications.

The other fidgety pastime happening below the real time beltline are the messages exploding in the pockets of the rankled and filed. I attributed any retention of youth to having one version of any story worthy of piecing back together and for not being online once powering off my PC. Committing one version per memory story is the way to age like Mount Rushmore – not like these pasty-faced, mortal Presidents of ours.

That rationale fell by the wayside over 3 squares of Sodexho helper when I was assigned my first Blackberry. So far the overwhelming command is to annihilate textual noise before it piles on too high. So far I’ve yet to master this in less than two clicks per delete.

I did manage to load my GMAIL contacts which meant I could relocate the physical addresses of the folks I was sending cards and letters to. It would have been a little too present tense if they received these mailings with a hometown postmark. Perhaps the post office could charge extra for our postal stamp location preferences?  That would take us out of the mundane and let us live in the moment of our own keeping. Alias locations powered by the USPS – it sounds so anti-government it just might fly.

The med student sees me return from checking our flight status – three hours after our planned departure. “is there hope?” she inquires with a smile. I tell her I never lost hope. Once you suspend yourself in the forces of inertia you can retain water, single versions of repeatable events, and yes, hope that I will not be tethered to defending my goal crease against the encroachment of voiceless smart phone chatter. I’ll remember that the next time I schedule a nonstop that leaves late anyway (because of its prior stop).

There was a rainstorm tonight that thundered across the southwest and the impact in Dallas was the same as a butcher block New England blizzard – at least as far as the arrival board times throttled in the chokehold of a hub like Dallas. I don’t know whether God heeded Rick Perry’s Stadium-based prayer vigils or my rain coat in Terminal C. Water belongs in sprinkler systems – not on roads and runways, right? Either way the postage stamp provider just may have some grass to mow when she wakes up tomorrow.

I think of this as I cut my click-counts down to three. I anticipate a near term future where telepathy will zap SPAM – dead. A killer app … literally.

Without it we’re bobbing around the in-box surface, doomed to a life of todays as stand-ins for the yesterdays of tomorrow. It’s living in the here and now of offline cards and letters that transcends the essence of giving those tomorrows the yesterdays worth preserving.
Posted by Marc Solomon at 7:41 PM No comments: