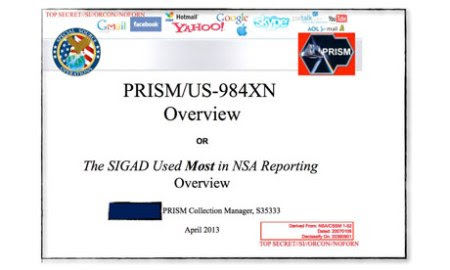 The media has fixated under this past week’s news leak that all Americans are now and forever spied on until proven dead. Wait … that might not be provable. This revelation casts a glaring light on the low profile and high concept surveillance innovators within the clandestine NSA – the part of our intelligence community that makes the CIA seem catty and loose-lipped.

There was something both alarming and innocuous about the story that broke in the Guardian on June 6th. This snooping or PRISM program is a vast soup of browser logs, text, graphics, videos, voice calls, and all manner of singing, dancing, and soliciting from my screen, to yours, and your next of yours. Think of the color-coded warning systems from the Bush era reformatted by degrees of separation and you begin to see Obama era risk assessment through the PRISM lens.  Concepts like criminal motive or case relevance have been replaced by the pervasive need to place our electronic selves under a passive and insidious house arrest.

Now I like to connect hypothetical dots like the next armchair analyst. But I resist the sweeping explanatory powers of slam dunk conspiracy theories. I’ve always maintained that paranoia is a luxury of the self-important. Our lives are much more open, generic, and predictive as data patterns than we are as erratic and complex individuals.

So before we start quaking in Orwellian tones, let's give the NSA its day in our court of opinion. Even if they answer in confidence to secret courts, it makes sense to vet the rationales behind such a deliberate and undiscriminating assault on our virtual identities. Besides we’re all part of the same feuding and dysfunctional family. If we know Big Brother’s allegiances and loyalties maybe he won’t seem so poker-faced, inscrutable, and extortion-prone.

First of all, it boils down to fairness. After all, what could be more even-handed than to spy on everyone? How could anyone feel frozen out of the action or singled out for selective treatment?

Secondly, when it comes to justice systems you can't bet against the house. That's because the PRISM guardians own all the evidence. You need to play by their rules to prove: (a) they're not following them as (b) they are following you. It's a circular tail-wags-dog-chasing-own-tail situation. It’s designed to tie tea party activists and ACLU partisans in knots for years to come. You say your rights are violated? Hard to try your case when your first amendment freedoms have been guantanamoed down in broad constitutional daylight. That's the blank check known as the Patriot Act -- the NSA having its way within the exigencies of perceived threats. Case closed.

And even without a public trial, there’s a great potential in PRISM for self-inflicted embarrassment. What if Big Brother arrests the wrong guy and that guy is you or me? That’s the advantage of secrecy. It’s botched raid insurance. It’s a hedge against hiring the wrong henchmen. It’s the peace of mind that comes with plausible deniability -- the first mover freedom to ask forgiveness in the future because it's easier than getting timely permission from a government at war with itself.

But never mind our institutional paralysis. Judging by the poll numbers the public's prepared to write a blank check to rival the size of the credit card financing of our delinquent war chest. According to the New York Times' David Brooks, recent polling suggests that pending terrorist investigations are beating up on the prospect of privacy intrusions by a 2:1 margin.

Take my privacy, please. I have nothing to hide. That's assuming a healthy skepticism of those bringing the charges, equal access to the evidence they're citing, and an informed and disinterested judges who won't throw us under the wheels of justice. As Danah Boyd writes this week in Slate ("If You're OK With Surveillance Because You Have "Nothing to Hide," Think Again), the big data Rorschach of PRISM is a placeholder for pious aggression as much as discrete protection:

“It’s used to create suspicion, not to confirm innocence.”

And it all boils down to the specifics of the cases yet to be brought -- namely who's prosecuting the aggression and who's being protected. A concentrated set of assets in the hands of a select few is a containment begging for its lid to be blown off. An establishment that hates surprises will conduct itself in secrecy and cloak itself in suspicion -- namely a presumption of guilt in the quest to wage the first articulated post 9-11 terrorist containment policy -- Dick Cheney's Doctrine of Preemption.

“[I]f someone has a vested interest in you being guilty, it’s not impossible to paint that portrait, especially if you have enough data.”

My problem child understanding of the PRISM program is shaped by my job as a knowledge manager. It's my responsibility to make information available, useful, and even prepared for the uses intended by my inundated colleagues. My role is justified by the assumption that when folks don't have to care where things are kept they can free up their resourcefulness to solve problems, not to be compromised by their login credentials or limited understanding of the gatekeepers and their keepings.

But in a world where Google can settle most public arguments there is a parallel private one. It says that secure assets deserve a single, repository. Think employer records and documentation. It's that safety deposit box ideal that lulls most managers into the seduction that the information unity of a single storage location will save our collective and individual asses. Our big NSA brother is no different. Only in our case it's the prospect of lost income, not privacy, that stokes the hot single repository coals.

“This is my livelihood. It's in a state of perpetual risk because I'll be blindsided by some error or memo or bug or unredeemable email tied to me six file folders deep on some mystery server.”

It may sound as quaint as a world of gold standards. But there are a whole flock of literalists who would throw all their mattress-bound savings from the market run-ups of yesteryear just to be at one with those bricks. There's Grandpa Ron Paul. There's Senator Rand. No slouch when it comes to blustering all over the shadows of big bro. Oh, look, Glen Beck's grabbing a titanium-laced shovel. They're all digging furiously to exhume the sacred dirt of a dignified Fort Knox burial. There but for fortune or just to keep the Fed accountable? I'm no economist so here’s the takeaway for my fellow knowledge managers:

Everyone needs a mental space holder -- a concrete sleeve for bookending their references. It doesn't matter how virtual, triangulated, asymmetric or plain old complicated the chessboard has become. People clamor for the tangible in a sea of uncertainties. So too do lynch mobs and NSA bureaucrats who are pledged to upholding the public order in blank check proportions.

Hence the mega warehouse to trump all data centers in Bluffdale Utah desert is now under permanent occupation by the commandos of security clearances.

NSA isn’t just boiling the ocean in Bluffdale. It's trawling the ocean floor as if national boundaries didn't exist. It's sucking our transgressions and transmissions down with a giant straw and belching our hiccups and encoded byproducts back into a vast swill of super collections. Rumor has it that the threat of a wild fire would unleash a sprinkler system so powerful that nearby Salt Lake City could slip into the Great Salt Lake. The collection effort appears as ambitious in volume as it's frivolous in an ultimate motive or meaning or justification. Data is the new stockpile. We collect because ... we can.

Since I'm spilling a parade of secrets I'll toss my baton in and march proudly with the middle-aged telecommuting knowledge grunts. I'll sign the release, I'll self-incriminate. I'll freely confess that I am a bona fide metadata freak. The layers of details buried in the assets I maintain hold the key to making information searchable and ultimately useful.

And the hastily scribbled set of defensible talking points is that metadata can't hurt you. I say hasty because if the NSA was truly in the damage control business they would have hired the PR wing of the leaker contractor. Booz Allen could repent. They could assure the public that metadata is actually a good thing. Especially in private where your credit card company asks if you were pumping gas in Colorado at the same time that you were sucking down brewskies in bean town.

The insidious side of metadata is that it provides groupable sub-sets of unseemly data sprawls. Add some unfounded suspicions to the mix and you've got guilt by association. That's a dragnet that happens every day on Facebook. What will happen when the terror-mongers catch up to the marketers? These are no longer personal computers.

It doesn't matter what you spring on your gadgetware. So long as we're tethered to a network there's a screen that only we can see and Google and the Google customers. And you thought your love of GMail made you a valued account holder? That personal device is more impersonal than meets the consuming eye. That won't change with your first pair of Google Glasses -- until you splurge on an even newer pair of Google spyglasses.
Posted by Marc Solomon at 1:03 PM 2 comments: