The Silver Linings of Graying Temples

When mom's demise began to lay claims on her speech, she gathered her neighbor Jill. In halted and fraying tones, she dictated the love she was carrying from this life to my brother and me. A lot of it was gratitude for her many joys. A lot was about her wishes for our futures. It was obvious she wasn't going to mention the burdens -- those were present in the ritual itself.

But she did  confide her sadness of birthdays and weddings and graduations to come that would escape her presence. She was missing a future that she had visited before she was to leave us. I don't know if either of us realized it at the time. But evoking future memories all but guaranteed her poignant and ceremonial presence not only in our future gatherings but our lasting togetherness.

Sometimes though, when I fathom my own removal from the guest lists yet to come, I assemble these fragments in a more detached state than our boundary-crashing mom. I won't be dragged kicking and screaming if the world around me remains in a benign state of oblivion. It's not that shuffling off the pier dignifies the modesty of a studied release. It's not fatalism. It's a comfort that the species has a replacement at the ready. And I'm not replaceable. And neither is my replacement. So long as those parties are still in the planning stages I can let go, perhaps a little less grudgingly than mom.

I took solace in April's Wired piece on Escape from the  Memes by Mary H.K. Choi. Choi admonishes us to vanquish our participatory narcissism or FOMO -- fear of missing out. That's the darkest corner of cosmic isolation. Or, as Choi points out, where memes get their power. That's where oblivion deserves to steal back some thunder while the memes are preening in the mirror.

Is it even possible to see the reflections of fading memes any more?  We live in a place in history where even our closets have windows. The memes have escaped before we know we're even under surveillance. Just when we're about to catastrophize a sha 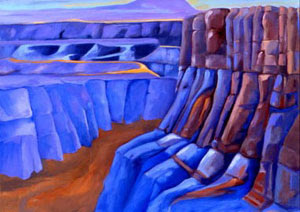 kedown, who should come to our rescue but our old pal oblivion. His advice? "Ignoring it will only make it go away."

That's what I try to tell Suzie the sales woman at the local Sleepys. She's about to convert me from an idle mattress speculator to a triumphant bargaineer. I assure her that I'm positive nobody can match her on price today and that I wouldn't be sliding my plastic in to meet her monthly quota. And as for the unresolved purchases in our cash-strapped futures?  I insist that I'm oblivious to brand. Caught sleeping with a Simmons instead of a Sealy? Not a reason to lose sleep over. I still might be registered up on Suzie's watch just yet.

Whether vagrant futon or pillow top halo, I can rest easier knowing this: I live in a community where every wrong turn has the potential of turning into the right direction. And there's an unformed mound in my new backyard with my mother's insatiable need to propagate and nurture.

That's uncertainty I can believe in.
Posted by Marc Solomon at 10:01 PM 1 comment: