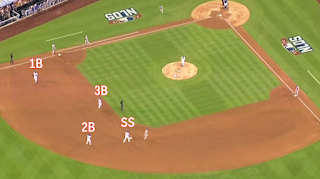 We all go home again through the Met vessel and my lifelong Bolishuk clan is the channel for reviving that journey. There's nothing unique about back-to-back pairings of the seven lean years between World Series appearances. There's nothing especially rare about a favorite sports team catching fire at the moment of an unexpected and glorious outburst.

But in an era of personal brand portfolios toting custom genders, religious non-traditions, and unpolished presidential hopefuls, we are celebrating a birthmark, if not a birthright.

We did not acquire a taste for Mets. Did we inherit one? Does anyone in this world go out shopping for a favorite team and land on this one? In my circle the Mets were appointed to us like a surname, like the homes we grew up in. We had no say in this matter -- no matter how vivid the smell, colorful the language, or camera-popping the word play painted to the bed sheet.

When the world around us struggles to self-identify through a carousel of designer fetishes we can surrender to the original love -- the source of our colloquial, erudite, suffering 11747 selves. Even when the Mets are said to be the odds-on anything – even the favorite: "There is a relentless, opportunistic quality to this Mets team now,” writes the New York Times’ Tyler Kepner, “Like a shark trolling warm waters with a half-open mouth."

Are we cashing in? We were expecting greatness as much as we were anticipating Murphy's newest set of laws:

… each achievement seemingly more oblivious to statistical gravity than the next. I admit it took a re-adjustment yesterday. No game was scheduled as there was no foe left standing for the Mets to waste into an early post-season elimination. But I'd be just as present and perhaps a little more believing if the Mets were on the receiving end of an 0-4 evisceration.

This weekend's post-mortem Cub rationales are all about being one year ahead of schedule. That sounds more workable as a consolation than a strategy. Can the accelerators revving the Mets destiny appointments be factored into the waiting room of next year speculation? Not with these new Murphy Laws on the books. The Mets might beat the Royals and finish last for the next three years. That's predicated on anything as substantial as the Mets becoming careerist sharks before their gifted starters opt-in to free agency rotation.

Either way, we are choiceless. We are destiny's stooges. We are born, bred, and wired to constantly question our unquestioning loyalty. That curiosity is roused but not predicated on the winningest of streaks. More than a franchise, brand, or betting pool, this is the only first love we are faithful to for life. Perhaps that's what our forebears intended when they conceived at the expansion birth that ... to err is human. To forgive is a Mets fan.
Posted by Marc Solomon at 9:35 AM No comments: