The Better and the Worse of the Most of Us

Jerry, my soon to be 21-year-old son recently found his inner blogging voice. He's come to channel his love of myth and legend into literal interpretations from comic books to the episodic depictions of super and sub-heroic versions of Hollywood films.

The strictest of his guidelines is that the antagonist should cause pain, suffering, and hold no redemptive qualities (other than serving as the vanquished prey of the superhero). To Jerry, if they're not 100% certifiably devil-made, it's not just the good guys who are threatened:

Remembering the Good
That same purity restriction is rarely lifted for the non-fiction twists of the life narratives we eulogize for absent family and friends. Their departure is enough of a presence to strike even the suggestion of disrespect from any eulogy. It's etiquette the living rarely need to remind us to practice. It's a simple grace. It's a lowering of the guard in the intimidating face of the eternal. Death strips the adornments we carry as standard-bearers and role models. That naked soul we praise at the memorial service will favor the way our loved ones wanted to be remembered -- even when we have no memory of their instructions. But the best remembrances leave open the unfiltered sincerities of the people they were, not the stations they rose to, not the positions they held.

If anyone in my life is up for challenging my son's purified formulations, that person is David Oats (1950-2008). A recent Internet search casually slipped in a series of his obituaries. That buffer of time provides a rare opportunity to remember David as an extreme example of heart-melting communion and shadowy behavior. I remember David as being better and worse than the most of us.

I knew him for a short, intense period nearly 30 years ago when I was transitioning from the Neverland of a self-designed college curriculum to the externally imposed demands of adulthood. The turbulence of that transition was spiced by his capacity for open-ended generosity and stone-faced obstruction. The fact that I stumbled into his passing obliges me to put his influence into perspective without confusing wholesale rewrites for an undignified burial.

David's irrepressible charm was his most glaring foible. He was willing to tell you not only what you wanted to hear. He had an uncanny knack of convincing you he'd held the same wish -- even the same belief system. For a 22 year-old college grad this was shear intoxication: not just the chance for a pay check, or even meaningful work, but a dream job of working for David. Simple naiveté can't explain away that wide a gap between a life imagined and the one being lived. But when you and David shared a core belief, that was no self-delusion. That was a plan of action! 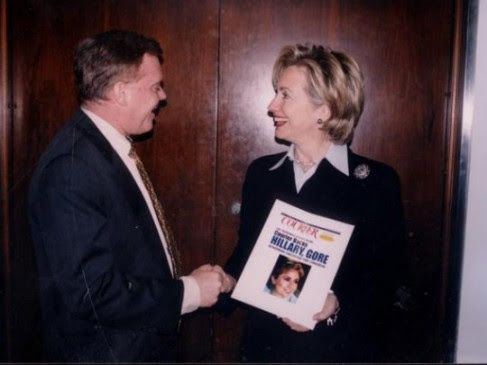 Hillary Clinton and David Oats at a press reception in the early 2000s.[/caption]

One of those plans vice-gripped my imagination for the better half of the two formative years between when I started my Div. III (a.k.a. senior thesis) and when I moved out of David's apartment. The theme of my academic studies (the history of the New York World's Fairs) was the proverbial message in the bottle. In those days the bottle was addressed to the President of the 1989 New York World's Fair to be.

My final project with Andrew Morris-Friedman was a video documentary starring David Oats as the community-organizer, consensus-building answer to the impervious kingpin, power-brokering Robert Moses who ordained the '39 and '64 Fairs as a means to secure his park legacy.

David's legacy consisted of trespassing through a construction site fence. And like some page out of Mayberry RFD the apprehended junior citizen punk was brought before Emperor Moses himself. After making some gruff noises about neighborhood safety, Moses assures young Oats that his park will be returned to his community with amenities 'o plenty once the fair ended. The fact this account of their unlikely meeting ran in David's New York Times obit says more about the journalism instincts of a future and failed promoter than the actual guest list for calendaring in a visit to meet that day with Bob "Fair Chairman" Moses.

To Andy and me, the exploratory nature of staging a third New York Fair wasn't a tribute to David's powers of self-invention. It was the generational realization that ginormous spectacles spoiling for sponsorships found their way to Flushing Meadows. We were just lucky enough to hitch a ride on the next repeating cycle.

And Forgive Us My Trespasses

On a more grounded note, I had no job lined up, or plan B, or even a post Hampshire place to crash. The notion of "home" was a waning option. I couldn't go home for as many reasons as there were no home feelings lost in that acknowledgement. After a prolonged viewing session of David's political video catalog I asked what the prospects were to continue in both video consuming and producing roles while figuring out how to land on my untested feet. My wish was granted.

In retrospect that's where I should have stopped taking wishes come true for granted. This is an arrangement that exceeded the imaginings, let alone the realities of the move-onto-anyplace-but-where-I-came from post liberal arts degree crowd. I should have seen this simple kindness for what it was -- a temporary respite from the workplace pressures to come.

But the trance-induced allure of the future-leaning '89 Fair is where I dwelled. That fixation held my unwavering focus through the tentative first steps into a dead-end internship at a media journal and onto a wedding / Bar Mitzvah video gopher at the Film Center on 9th and 45th -- shouting distance from the sound stage run by Liz Dubelman, my first fiancé.

My daily presence in David's inventive and unpublished life came with its own set of constraints and expectations. My guesswork is based on what he must have anticipated on the day I moved in. Over those summer weekends Liz would drive in from Jersey on the weekends. Just the simple arranging of it prompted a reshuffling in his shadowy preferences for floating out of range and below the radar. For instance, delivering dial-tone to his Kissena Boulevard kitchen only occurred after Liz voiced her concern that phone service was not an opt-outable preference in pre-cellphone society. David's penchant for cash-only transactions suggested a level of privacy that regarded the mundane transactions of the market as outside and unwelcome intrusions. His unwillingness to give references or open his networking doors for Andy and me meant three things to Liz:

I'm not sure history would be as reproachful as a future spouse crashing a cloistered bachelor pad, glass-enclosed floor models of former fair pavilions, and VHS-enabled broadcast archive. One need not peer too closely into David's fantasy construct 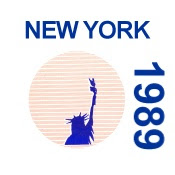 ions to find only facades behind the blueprints and fabrications acting as placeholders for actual ground-breakings.

The real history lesson here is not that the sunny disposition David carried was concealing a diabolical nature. It's that his personal nature of "taking me in" was a selfless act, not some kind of an investment or quid pro quo. My being "taken in" was a reflection of my inexperience and compromised living situation. What made this so difficult to accept was the stiff exit price he exacted when Liz and I moved to our first Manhattan studio the following spring. That move precluded my own smaller scale alternative universe -- one that I'd cultivated, leveraged, cataloged, and squirreled away since the age of 5. Unlike most lost childhood collections, this one was repossessed by a rent-free landlord.

That remittance transpired without threats, confessions, or basic forms of cooperation. From one obfuscation to the next busted plan, my lost collection represented the same control fantasy that filled David's postwar garden apartment stocked with television histories, one-of-a-kind recordings, and Fair memorabilia. The aftertaste of his deception took as long for me to cycle through as a whole drumbeat of shoulda coulda woulda charades: the fate of the '89 Fair, the run of an '88 Cuomo for President campaign, the vagabond fairground buildings fallen into decay, and all those lost NYC Olympic bids to come.

It sounds juvenile, I know. But it runs a course deeper (than I imagine) when your mom's the culprit for tossing your cards out (along with your comic books and matchbox cars). I wouldn't know. I never collected matchboxes or comics. 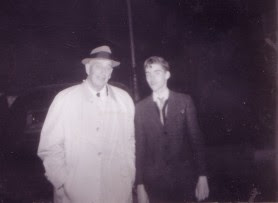 Robert Moses and David Oats outside the Chairman's office in the Administration Building (now the Queens Museum).[/caption]

About six months after my cards were banished to memory, I got in touch with his former partner at the Queens Tribune and local Congressman (until this year) Gary Ackerman. After I shared some of my gratitude and misgivings I asked for some insight about David -- a perspective I couldn't possibly gain from such a shielded and specific view of his old friend -- distorted by the short, intense time we had shared together.

With hints of frustration, admiration, and humility, Ackerman said a curious thing: "It's a good thing David wasn't born a girl, because he'd never stop being pregnant."

I should have realized that this observation from a well-regarded politician was about as sincere a rationale I was likely to receive for closing the books on David as my adopted and short-term older brother figure.

I suppose in the movie version, David Oats would be the hero and villain. He would be played by the same character. Which side of him wins out, I cannot say. But if the movie were true to the person the audience would forgive him for putting the world he wanted to believe in ahead of the one we live in. Maybe if we understand that about David, we can free up our own narratives where our real world superpowers can do the most good.
Posted by Marc Solomon at 6:10 PM 2 comments: