The Lamentations of Mario Cuomo 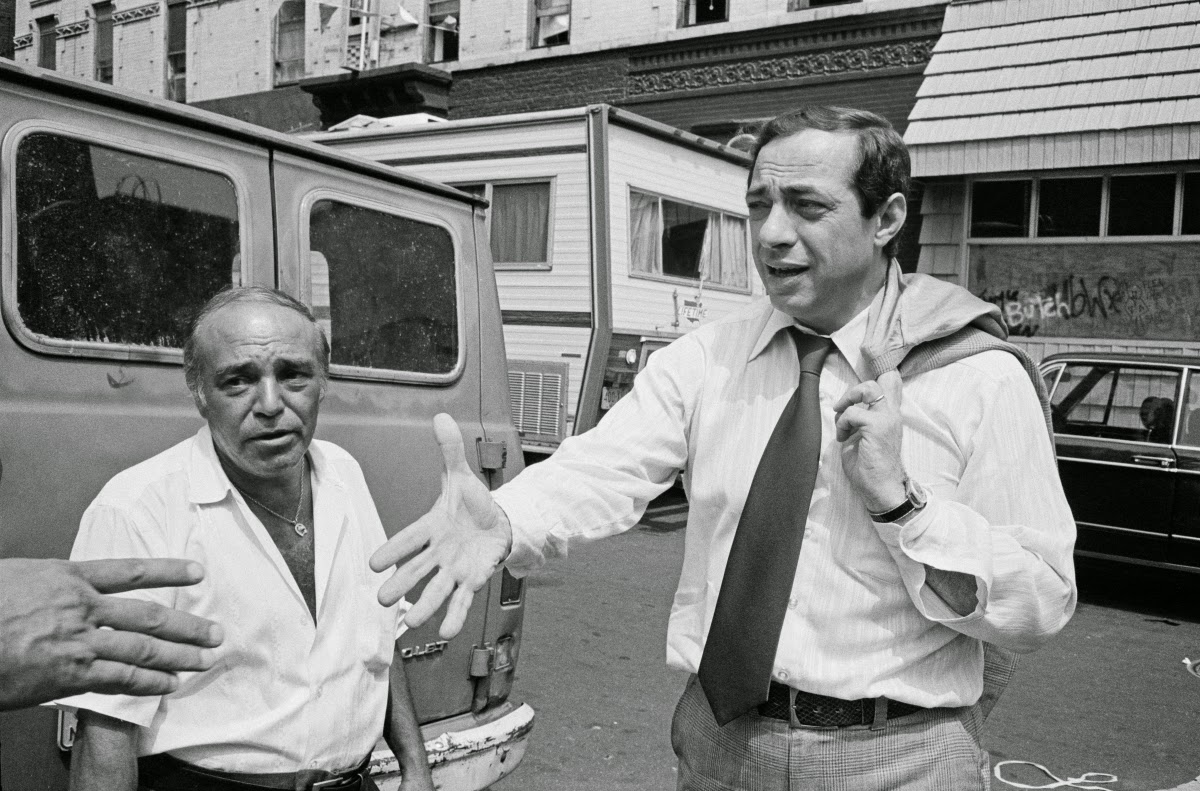 What do you call a politician who was transfixed by questions, tormented by doubt, and scattered, if not bored by the hand he was dealt in the austere and myopic times he governed? You would call him that rarest of political animals. The likes of which faces not obscurity but pure extinction when fate’s calls go unreturned. One insider profiling Mario M. Cuomo on the precipice of a Presidential run, concluded that "the only institution in American politics more raucous and divided than the Democratic Party is Mario Cuomo's mind."

What other public figure, let alone one whose influence and notoriety rested in an electorate, would be prompted to justify that course of action at a luncheon at the Player’s Club:

"Am I certain that I'm the very best there is? I can never come to that conclusion."


Typically when a politician wears their heart on their sleeve it’s a big valentine to themselves. For Cuomo it wasn’t self-love but self-reflection that steered him clear of seeking higher office. Even now his improbable reticence plays out less like coming to terms with the ally of honest doubt than bearing the stain of unwelcome disruption…

• An unscripted ending.
• The director’s cut that his most ardent followers fast-forward over.

In January 1983 I left the tie-dyed ivory towers, co-ed saunas, and communal mood colony of Frisbee University, a.k.a. Hampshire College for the formality of three piece polyester lobbyist luncheons in the Empire State Plaza. An internship in the New York State Assembly was about as exotic as it was the follow-up to my impractical liberal arts track -- accent on the liberal and not the track. In that first month I moved to Albany, Cuomo outlined the core thesis in his first inauguration that he was to reprise on the national stage:


A generation later that patently center left blueprint was waiting for a ride on someone’s lofty campaign footing. The rationale always sounded more defensive in its declaration than a rally cry to the working classes. Yet it could easily serve as the roadmap for the newfound strut in Obama’s lame duck waddle.

In Albany I was placed with a former schoolteacher freshman named Fran Pordum who was as far to the right as a New York Democrat could be. The fact that Fran represented the slice that delivered Cuomo a hard fought primary victory over Manhattan-centric Ed Koch also informed my leftist-centrist views on the pragmatic necessity of meeting in the middle -- assuming the level of trust required for acknowledging the sharing of credit along with the sacrifices.

Koch would describe his loss to Cuomo couched in terms of his own falling out with city voters where he remained the head of the NYC house. The marriage was jeopardized when Koch began courting his upstate cousins. Running for governor wasn't just an over-reach. He was actually straying from his marriage to the city that was to elect him another two times after he flirted with statewide office. But the boonies and the burbs never felt like acquired tastes when Cuomo summoned his family of New York -- a reference to the same community-seeking unity that survives such expansive interventions as big ticket social programs, affirmative action, and economic opportunity for the disadvantaged.

But Cuomo governed in lean times compared to an era since ended. The liberalism he practiced was more about the process of how we engage as citizens through tolerance and compromise. It was rarely about outcomes although his vehemence against the death penalty inspired the construction of more prison space during his leadership than any New York Governor before or since. Not quite the generous outcome one might have expected from a big-hearted liberal:

“History will not record that he was a great governor. His budgets were almost always late. His reflectiveness and reclusiveness did not dazzle legislative leaders. And his flight from San Francisco [after his 1984 convention speech], like his choice not to run for President in 1992, may have indicated a reticence that would not have served him well as President. Or maybe it camouflaged insecurity that was both disabling and wonderfully human. Unlike most politicians, who have no interior lives, he was worthy of a novel.”

One bone of contention Cuomo used to ridicule the opposition was the unquestioning allegiance to ideology that led in the early eighties to the political inroads of the GOP in the Roman Catholic Church. When Cuomo offered a persuasive defense of pro-choice in 1984, he was just as much railing against the authoritarian streak of unwavering conservatism as he was providing a moral compass for conflicted parishioners. And he did so not by advocating for abortion but by accusing the right of using government to inflict church law on a nation spawned by religious tolerance:

“He spoke out against an ‘unyielding adherence to an absolute prohibition’, and explained that his faith did not mean he had to comply with church teachings in his role as politician. ‘To assure our freedom we must allow others the same freedom, even if occasionally it produces conduct by them which we would hold to be sinful.’ He asked his listeners at Notre Dame University, a Catholic institution, ‘Are we asking government to make criminal what we believe to be sinful because we ourselves can’t stop committing the sin’? The church was not pleased. For a time there was talk of excommunication.”


The principle of point-making and score-settling extended beyond public institutions to the less abstract nature of bare knuckles campaigning – retail politics:

“People would come up to him after the meetings and say, “I’m still not sure I agree with you on the death penalty, but I certainly respect your position.” In the end, they decided to vote for him. They voted for him because Mario Cuomo was a man to respect, a man who respected them well enough to tell them what they didn’t want to hear.”


It was the courage shown by Cuomo in finding, acceptance, and delivering of these nuanced arguments that fueled as much passion as speculation that he would turn his oratory gifts into the bully pulpit of the Oval Office.

It was the yearly tiff with the Senate-run GOP that provided the backdrop of Cuomo’s refusal to enter the New Hampshire Presidential primary in December, 1991. Again, it wasn’t the calculation of higher office aspirations. It was the family on the line with Cuomo regretting that he “couldn’t abandon the state at such a time.” The New Republic wrote that…

“Cuomo's restraint always struck some as strange—perhaps even nefarious. Few today can understand the limits of ambition in a powerful man.”


I remember not thinking of an unselfish and elevated command of one’s station. I thought it was chicken shit. His refusal to run never entered any calculations of mine. Years later I understand his reticence and it’s not written in the language of opposition research, vanity, or thinness of skin. It’s a sense of propriety that has no place at the fundraisers or in the broken field scramble where the candidate reveals their “primary colors.”

Aside from all the armchair history-shapers there was a remarkable gift that stood in the way of all judgments, both in haste and in favor. That’s Mario’s connection to a lectern. Wrote James Fallows:

“Rhetorical success, like presidential effectiveness, involves more separate elements than you might think. It helps to have a good voice and physical bearing; to have actor- or announcer-type skill in presentation; to have an ear for sentence-by-sentence euphony; and to understand the intellectual and emotional shape of speech. Mario Cuomo had all of these, and our public life was richer when he was an active part of it.”


His biographic arc plots his coming of age in the fifties and ascension to power in the eighties. But that ignores the simple distinction that Cuomo was first generation American. He was no more a bi-product of the postwar suburbs as he was a hobnobbing insider – more committed to holding court than assembling a coalition. Cuomo was the consummate outsider whose commitment to power circles wavered to the extreme of Marx (as in Chairman Groucho).

Cuomo would never indulge in the public identity of the self-made man. It worked against liberal pride and the cultural grain of a community-based leadership. Yet on a private level Cuomo moved inside his own circle. He stamped his own signature. He put himself through law school. Hell, he showed up for grammar school without knowing a lick of English – an experience better known to social progressives of the Depression than during the Reagan Era.

David Frum summed up the fierce and combative bootstrapping of Cuomo’s formative America:

“Cuomo never forgot his origins in the immigrant working class that idolized Franklin Roosevelt and elected John F. Kennedy. Cuomo memorably compared Walter Mondale to polenta, the bland, mushy cornmeal staple of the Italian poor. Cuomo’s most famous speech ended with this haunting evocation of his deceased father: “I watched a small man with thick calluses on both his hands work 15 and 16 hours a day. I saw him once literally bleed from the bottoms of his feet, a man who came here uneducated, alone, unable to speak the language, who taught me all I needed to know about faith and hard work by the simple eloquence of his example.”


I used to think that the ultimate irony was that this heavyweight Socratic musclebound mentalist would owe his historic marking to style over substance. Now I realize Mario doesn't owe anyone anything -- least of all the history we share.

“Although we may take his mission to be successful, its effect on Cuomo was to make him wonder why the political process seems so much at cross-purposes with reasonableness and common sense. ‘It hardly seems worth the effort to attempt to change it.’ But he told himself that it’s the trying that counts… Perhaps we have seen too many redeemers come and go, leaving us pretty much where we were, and that may be why it is so refreshing to come upon a candidate for office who has already learned that tragedies do not often end happily.”

Posted by Marc Solomon at 4:26 PM No comments: