One of the telltale signs that your heart is in lockstep with your head is that your home and hearth is also your most prized capital investment.

An indication you're on the cusp of home sweet investment is the positive tipping point behind the rejoinder formerly known as there-goes-the-neighborhood. The gentrified winds are blowing on my squatting parcel and summoning these changes down the newly-paved Route 47 off ramp known as French Street: 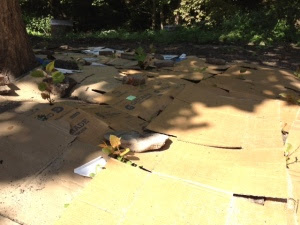 Knotweed pops through a patch of cardboard mulch like so many pimples gathering after a teen pizza binge.[/caption]

This gushing of OCD on display tackles a very different agenda beyond the foot-wiping at the front door. There are no such dust-ups on the Hazmat-strewn floors of my backyard. Chards of broken bottles, oxides of batteries, remnants of socks, and the spew of non-degradable garage sale relics form an open burial pit of squalor. This caliber of decreptitude is normally reserved  for a harder core of hillbilly location.

That's when rugged individualism goes it alone and flies past the D.I.Y. stop sign and straight into the DDA ("don't-do-anything") ditch. That's the post industrial stench rising from the fertile river beds of Hadley:

"No other species fouls its own nest," as my second spouse liked to say in a categorical rejection of another isolated mountain culture. The flock of the church of humans has been known to place claims on the privacies contained within these soggy, crumbling mountain isolations. Abuse of the land is no less inevitable than the slicing through of these edens-turned-junk-yards by the rampaging of cold flood flash points into the convulsing rivers.

My obsession reminds me of the fascist four-year-old games that I used to play in pursuit of childhood justice fired by World War II movies, newsreels, and riveted fixations on "Victory at Sea." My fighter squadrons were fresh on the heels of those unrepentent Pearl Harbor bombers. "Take that!" I'd shout, pumping my payloads into the tails of those nose-diving dragon gunners. "Take that to your Emperor of Knotweed!"

That's the viligence that captivates the digging up of the necks of these vermin by the clenching of my dirt-stained fingers and insatiable shovel. The vehemence only deepens when they rewire the rooting systems I've disrupted. I've created my own barriers by patching together some cardboard mulching around the most infested areas. The counter-insurgency lies somewhere between feeling the need to squeeze out the latest outcrop of whiteheads from these lawn pimples and playing whack-a-mole with a tenacious and cunning adversary. This is certainly the gaming board when a new strain peaks its head above a crack in my patchwork.

My tree guy Matthew tells me that I'll need to keep my retribution guard up for at least another two years to wrest control away from the invasion of these garden snatchers. Given the small dimensions of my yard I intend to maintain a heavy footprint on the lay of this promising land patch.
Posted by Marc Solomon at 5:11 PM No comments: