The Right to Self Termination 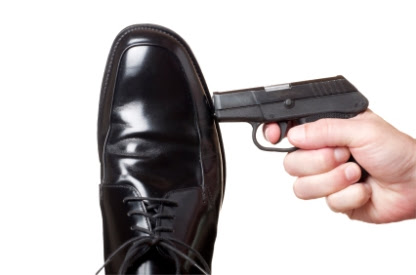 There are two kinds of people when it comes to change: (1) those that hate change, and (2) those who dislike it. This includes those who thrive on it (i.e. first responders or management book authors). I count myself in the latter camp although I leave it to the bravado of the rescue squad and the ambulance chasers to rise above their milder disdain for change.

This dislike stance told me to seek out the next change before it found me first. So I opened the door this fall on the "job market" -- two words that always play better in speech and policy-making than in actual qualifiable positions. My forte is in making information useful and I have yet to see a single opening with that line of work involved. Perhaps that's why job security and professional competence have had a casual relationship through-out my so-called career.

No suprise then I was both shocked and delighted to see a position for a reconciliator of enterprise architectures -- someone who could make those disparate systems talk amongst themselves as well as the isolated teams who rely on them for designing products and supporting processes.

The delight kicked in with the realization that I could work from strength as an information architect on behalf of information technologists (the people with the positions to fill in actual job markets). The deal was cinched by the fact this is a product-driven company and thus a culture of politically tone deaf, socially challenged, and problem-smashing engineers.

I had served the better half of the past two years at the pleasure of CPAs in a Big Four accounting firm that had acquired the operational engineering talents of a mid-size management consulting firm where I did knowledge management via Microsoft SharePoint starting in 2005. Here the main value proposition remained constant: "what do you make?" However the corollaries could not be further apart:

Engineer: How do you make it?
Accountant: How much do you owe on what you make?

One was exact, unbending, and interpreted from an unassailable regime. The other was approximate and multidimensional, and crafted from a fluid and complex set of proprietary assets, market forces, and the immutables, i.e. electronic properties of materials, laws of physics, etc. Accountants and engineers are both introverted, consultative "numbers people." But there's an oil and water schism going on here that makes Arabs and Jews look like ancestral soul mates.

The guys from my old firm liked to tinker. They liked to take companies apart (batteries not included) and reassemble them so they ran better. They would turn the problem on its head just so they could figure out the right questions to be asking. The tax and audit people have multiple authorities to answer to -- but they never change. It's the same regulated economy from one nation state to the next. Accountants do not review problem sets in search of reductionist logic. They seek "the number." It's the tax code that confers their authority -- not patterns in data, not arrays of silicon nanocrystals. Show an accountant a data cloud as the answer to GPS and he'll be more interested in the cloud's locality than his own whereabouts. It comes with the territory.

The accountant formulates what the engineer rationalizes, assuming the government's a no-show. It might not be the melodic orchestration of a more perfect union. It's an arms length hand-off but a collaboration nonetheless. What I've spent the better half of two years trying to rationalize is how a trade bent on document preparation refuses to practice knowledge management. How it's a higher value function for those documents to be sequestered in a vault than leveraged as the missing piece in some future unsolved puzzle.

So about that new job...

I could approximate the moment in the interview process where I thought I couldn't walk away from a return to engineering culture. It occurred when my future boss began recounting the tangle of acquisitions that had brought fresh thinking to augment the firm's strategy. But much of that inspiration was trapped in an airtight silo that had never been provisioned to the larger knowledge base. The opportunity was presented as a difficult conversation that no one was especially keen on having, let alone a solution for integrating these silo-bound wikis, file shares, and discussion lists where feudal geeky orders form apart from the larger community. I told the guy that wasn't going to be a problem because I was going to let these coders go on developing in whatever comfort zone met their climate control patterns.

This was not going to be a power grab in the form of:
"You can have any color content so long as it's SharePoint..."

This was about indexing large chunks of undocumented outputs and then auto-classifying them for community review through a federated search. This is the ultimate success factor that us KMers keep a secret to our own detriment. It's not about imposing a single platform. It's about getting on the same page. It's not about shutting down renegade skunk works. It's about opening up the pathways of collective know-how by freeing our users from the tyranny of document location, i.e. knowing where stuff is.

Well, I didn't sound so preachy during the interview and I'm not sure my new boss bought my argument. All I know is he suspected that I believed in what I was telling him. And that was enough to get us to the next round. That's when I tapped my engineering network. Former bosses and colleagues testified that they too drank from the same punch bowl and gave the intrepid, nonplussed tip of operational approval that only an apolitical and resolute dilemma smasher could resolve. These are my people.

As a result I have a once in a lifetime opportunity. It took 50 years. But I finally found a way of firing myself from a job I needed because I found another job I actually wanted. That's a stroke of luck I will value above and beyond any status of vocation or income stream. You don't have to worship a dollar to go to work every day. And you don't need to be (a) starving, or (b) an artist to cherish the intellectual freedom that comes with problem-solving as its own reward.
Posted by Marc Solomon at 5:52 PM No comments: