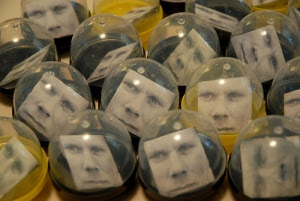 In this latest Presidential race we can be sure about three things:

1) We're about to elect a Harvard-educated and aloof technocrat more comfortable with crunching the numbers than pressing the flesh.

2) He will claim a mandate to represent all Americans in order to implement an unspecified agenda (even though he's not on speaking terms with roughly half the country).

3) Privately neither candidate is too optimistic or delusional to believe they can reconcile their campaign rhetoric with the business of governing over a house divided on every major issue except one: let someone else (besides our soldiers) take the hit for a growing government supported by a dwindling tax base.

Pity our next President-elect. They need to suppress their better angels and the notion of a shared sacrifice, lest they're booted from the beltway by the same people that hoisted them to victory.

Pity our citizen-voters. They missed out on the boom-boom Bush years and the hush-hush Obama-Bush sequel. There are scores to settle that make the middle class squeezes of the past feel like a hot compress in business class.

But there is a way to restore credibility to the electoral process.

There is a way to give political candidates the breathing room they'll need in order to fix stuff, i.e. raise taxes and lower services, without being impeached by the alienated opposition.

There is a way to impose certainty on the tentative nature of change as in: "I'm certain I'll be paying more for less and won't insist our politicians pretend it away." The return of animal spirits awaits the bravado of certainty in the bag. Without our reliable strut, we're in the same rut.

Most pointedly, how do our deplorable political parties fight their way back to respectability? How do they wear their vested interests proudly? How do they dismiss bipartisanship with the straight face of tomorrow and not the smirk of today?

The check's in the early balloting mail

They can rally support, not with platitudes and empty promises, but with cash paid out to the non-party members who matter: people who can't decide who to vote for.

Surely this is illegal, right? Well, the 24th Amendment bans poll taxes but says nothing about direct marketing to electorates or the setting of voting prices. To liberals this may sound like another cynical ploy to kick self-interest up another discouraging notch. The death knell for the commonweal and the greater good.

But let's think this through. The act is genuine. It's an investment by political parties and their donors. Here's how we speak directly to a polarized and cynical people. We channel cash to those unregistered Americans who decide elections through their indecision.

Why steal an election?

Why steal an election when you can buy one fair and square?

Paying for votes can mean a lot of stops on the low road to dysfunctional government. Is this what George W. Bush called "fuzzy math" without taking exception to the numbers in his opponent's budget plan? Is this a basic deduction one can make around the political meme-seekers trying to rationalize the downhill momentum of Citizens v. United, voter fraud, or those impending fiscal cliffs? Is this the new normal depicted last month in Bill Clinton's convention speech as basic arithmetic?

Paying for votes could put to rest all this talk about voter fraud and all the latest court challenges to voter ID. There won't be any checks drawn on the accounts of the deceased once all those on-shore voters cash in on the action. Direct payments to voters will have the same impact on public apathy as robotic cars will have on the speeding ticket industry. It will obliterate negative campaigning for good. In the meantime, all those moochers, freeloaders, and deadbeats can do something constructive while biding their time for the next great wave of American prosperity to kick in.

What is the color of your skin in the game?

Whether you count yourself as a 99 percenter or a jet-setter, or the 47% on autopilot for an entitled silver spoon feeding, there's one group that we can all set our growth beams on -- that's the unwashed and unvanquished object of those Super Pac spoils: the undecided voter. But would those undecideds be a vanishing breed if the Coche brothers and the George Soroses, and the casino kingpins could cash out directly? That's right. They could pay directly for those votes instead of roulette-wheeling their dealings to local broadcasters in swing states.

Direct is a form of both payment and marketing. Why not a form of government? After all, our elected officials spend a good 70% of their time fetching for dollars when their only real conviction is to be re-elected. Who has the time for convictions when they may need to replace them in the interest of unexpected events or languishing sound bytes caught on tape? What's the difference between an elected official on the take and the "takers" who vote them up or down from office? The difference is that representatives get rewarded for keeping themselves in power while their constituents get the spoils of free speech piling up on their cable screens and in-boxes.

Payouts are the new rebates

But paying  for votes is not just limited to electorates. We pay our kids to attend school. We pay farmers not to grow food. We pay food companies to market diabetic-inducing groceries for the express lane. We subsidize oil exploration so Exxon Mobil can super-size our addiction to oil. Actually We pay that one out twice before pausing to fill our tanks. That second hit happens when our taxes confront the debt our Chinese suitors assumed to underwrite our military occupations. What occupy movement is this? Those countries with high concentrations of hostility that invade our embassies, dis Israel, or worse, threaten to choke our economy.

And therein lies the choke hold. Us decided voters hold as few surprises as we do cards for deciding elections. Show me a reliable party line voter and I'll show you an oblivious politician. Exhibit A: the 41 states without battleground status. A counted vote is as worthless to the voter as it's money in the bank for the candidate -- a blank check for spending political capital on carving out electoral districts, complicating the tax code, or even settling personal scores.

The transparency of market-based democracy

The sincerity of a bribe might smell bad to some but it's a lot more understandable than the slippery abstractions that pass for campaign promises: putting us back to work? Change we can believe in? How about payments we can deposit? Who needs to pander when we've got a budget that operates below the radar of campaign ads, let alone media scrutiny? Delivering votes by channeling campaign funds to voters means that capitalism is hard at work, even if our politics are too fractured to lift a tiny compromising finger.

What if we put our votes on the auction block? The true undecideds and even us softer core fence-sitters? How would this all work then? And what would that do to the Australian ballot? That's our right to vote without personalizing the transaction. Why would the major parties want to invest in the American voter when we're protected against needing to account for our ballot choices? Here's how that could play out:

1) Voter puts opening bid up on their social media page

2) Voter bundles bid with other undecideds in their districts

5) Bloc members vote to accept winning bid from said party and sign contract binding them legally to (a) vote; and (b) reflect the endorsed party positions and candidates

What's a little pressure among peers?

Does that mean we still vote by secret ballot? Absolutely.

Want to spell the difference between the uncertainty of polling data and the final vote count? It's the sound of that pay-for-vote check being cashed at the corner ATM. That's when the party can enforce the voters' contractual obligations. It's the line crossed once the volume of accepted bids eclipses the margin of error from the last election cycle.

Baring an onslaught of legalized immigrants, the entrenched turnouts of both parties will shine in glaring relief the tendencies of those bankrolled voters to stick or stray. If the backed party candidate loses, is it because the opposition lured in more voters? Doesn't matter.

My brilliant strategist buddy Canuck surmises that future payments will freeze up should this doubt persist. Someone on the losing side didn't pull his lever weight. They ruined it. For everybody.

Jeez, talk about disenfranchisement.
Posted by Marc Solomon at 10:17 AM No comments: