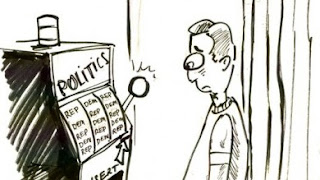 Are elections rigged? Maybe. Are they hacked? Could happen. Are they tampered with during shipment and handling? Poll workers and experts say no. What could they be hiding? What we know for sure is that in the era of the permanent campaign cycle...
Representative government was the delivery vehicle for bringing democracy to the masses. But what are our collective roles as participants in that process? In the plot to undermine democracy, our deep and open doubts form: (a) a national consensus, and (2) one secret no one seems to be keeping. In this fifth national election in the young century, what is our proper role as citizens?

Are we...
To the electoral machinery the American voter is composed of: (a) a basket of friend requests to (b) one part debt load and (c) two parts gene pool. We know this because we hear about the path to victory and that path is lined with ethnicities, regions, income, and education levels. The boundaries that define our public lives are one in the same as our value to advertisers.

With that kind of calculation is there any surprise that many hold regard for the vote as an endorsement of a system that has no other purpose for us? There may be some lingering guilt associated with betraying our servicemen and women's fight to preserve our right to it. There may well be a perverse fascination for using the vote as a cudgel. If the ruling class compromises the social contract between the government and its citizens, why not just finish the job?

In 2016 the citizen-outsider needs no special favor to witness the insider trading, groveling at fundraiser dinners, and the revolving door from elected office to privileged relationships. On the virtual battlefield, the first amendment can just as easily be invoked over dark money and cyber warfare as it can over freedom of speech, the press, and assembly. As a world awash in WikiLeaks turns transparent, the more delusional our conventional reality becomes. Think of elected leaders publically worshipping at the altar of Horatio Alger and square that with a recent Derek Thompson piece in the Atlantic on America's Monopoly Problem:

"The land of the big. And the home of the consolidated."

It's not just that the status quo works for those in power. It's that the only power the average voter holds is to punish the system with their votes – however many entangled pieces may vaporize before the new administration takes office.

Vandalism in the Voting Booth

It's a sobering reminder:
But no one gets to pick how those single issues are strung together, let alone the candidates for speaking to them. A zero sum game is a ray of sunshine compared to the lose-lose proposition of a Clinton Trump victory. Both candidates defy all precedent in their unfavorables while conspiring to create one of the highest turnouts on record.

Never before have so many in one camp taken collective action to block, deny, and ultimately prevent the will of the other. Whoever emerges will earn a mandate – not to lead but to defend and deflect the howls of protest from the vengeful and affronted. When moral compasses run afoul of legal codes the disenfranchised are not only ostracized but banished from the larger community. The only option between conquest and surrender is the escape of withdrawal – to fantasy elections.

Level With My Playing Field

I've fixated lately on America's nose-diving attention to NFL games. At the core of football as distraction are the conventions of rules and trappings of the non-events to be endured: first down measurements, thrown flags, PSAs, timeouts, stretchers, stats, commercials, and station identifications for starters.

Why do we want to throttle our  collective attentions – pull them off to the side of the road for the passing ambulance corps – when we can lock into the pay-offs of games called by our plays, players, strategies, and even our own rules. From the first tax loophole to the last tacked on amendment, what can be more American than playing by those?

Fantasy elections tackle another largely unaddressed need and that's a level playing field for rating politicians. Key to this shift is that voters and not fact-checkers are the ratings agencies. Not only do fantasy voters have the same fact base to draw from but they decide which facts on which to make that determination:
As great as dislodging the media might be to us craven messenger-shooters, this middle-man elimination scheme pales in comparison to the ultimate removal – YES!

The yanking of the Republican and Democratic umbilicals from the womb of the American electorate. In such a scenario the color wars of red and blue, the racial rancor of black and white, the belief battles between religion and science and that widening gulf between the 1% and the remaining population on earth. That great reckoning is about liking, loathing, and/or reserving judgment on the myriad of stances, roles, policy positions, and alliances that collect around the limited choices we have in a candidate X versus Y world of today.

With fantasy elections voting freedoms are extended to a list of top ten issues. These picks are not subject to the whim of mass shootings, unscripted gaffes, or other orchestrated surprises. As a set of chronic conditions and tough problems, they are resistant to the whirlpool of visceral gratification that pulses through the cable news circuit. They are not a list to be bought or placated by a power-broker. There will be repeated tallies throughout the play-offs – um, I mean primaries – where fantasy voters can begin linking their leanings to the stances they're hearing on the campaign trail:

Fantasy elections permit the voter the satisfaction of not only voicing their concerns but choosing the issues that concern them in the first place. Politicians can't choose us like voting cattle from some demography-based meat market. They can't pony up based on delivery us like some kind of tribally-connected takeout order arranged according to a standard issuance of dog whistles:
My favorite accusation comes from this morning's checkout at the North Hadley Sugar Shack. Shannon Kendrick describes the self-interested participation of the political classes as paying $ thousands a plate at a fundraiser without pennies towards helping to feed a needy family. The point here is that American greatness can only occur when Americans are engaged for our ideals and not our demographics: Represent us for our resourceful minds – not our feeble, unyielding body parts.

To paraphrase the late Tip O’Neil: All politics is (not only) local. It's frontal lobal. That's an Election Day fantasy that can bring democracy back to the ballot, no matter who wins tomorrow or protests the day after.
Posted by Marc Solomon at 9:37 AM